Brief history of Physics courses at the University of Camerino

Scientific activity in Camerino dates back of several centuries. After the Italian unification, the University of Camerino including two faculties (Law and Medicine) was recognized by the Italian government. The institution of a first well organized Physics Laboratory (Gabinetto di Fisica) is assessed in the late 800. A famous scientist in agronomy and natural sciences, Nazareno Strampelli, is in charge of taking care of the Laboratory for some years. 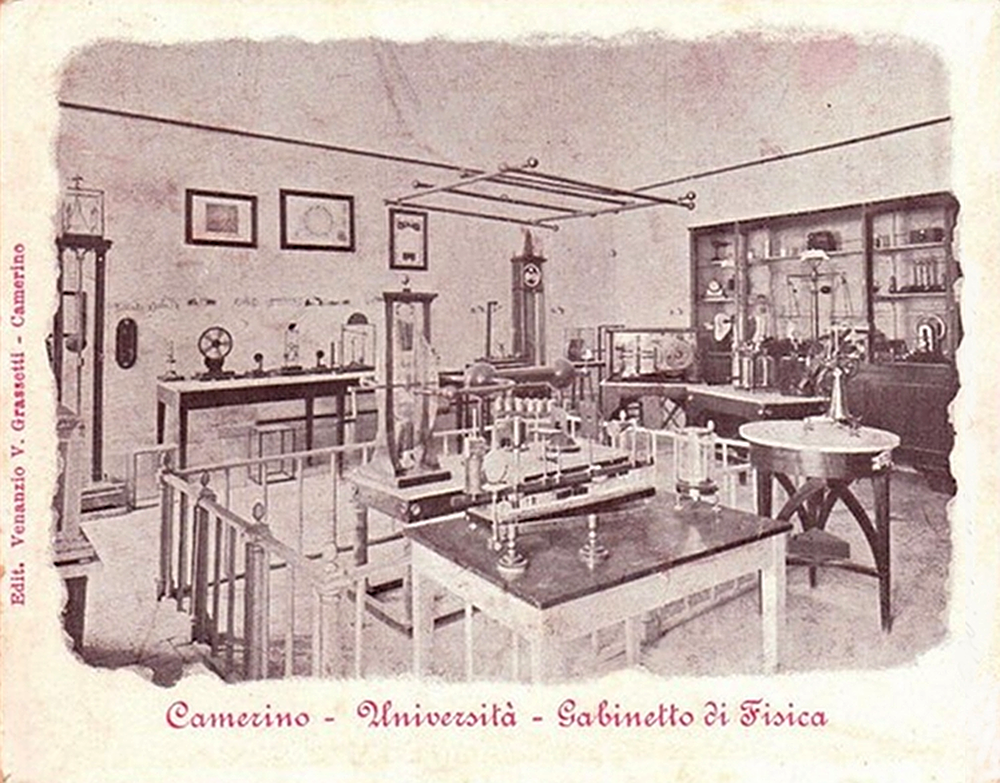 Since then, several scientists were in charge of teaching Physics up to the first half of the XX century. Gilberto Bernardini was professor in Camerino in 1937.
After the second world war and the institution of the Italian Republic, the University was declared public (1958) and new scientific schools were established (Chemistry, Mathematics). The presence of physicists gradually grew up and in the early seventies several professors and scientists had been active in different fields. M. Ladu and coworkers were developing detectors for radiation at Frascati. L. M. de Socio and G. Gaffuri were involved in developments of theory of fluid dynamics.
Experimental research in condensed matter physics started after 1975, following  the temporary engagements of several young scientists coming from the University of Rome (A. Bianconi, S. Nannarone, P. Tombesi, F. Evangelisti) for lecturing Physics at Camerino. The first scientific papers obtained by optical spectroscopy experiments carried out at Camerino were published in 1978 by S. Stizza, S. Nannarone, R. Bernardini, and A. Bianconi. In the early eighties other reputed scientists were lecturing at Camerino including P. Tartaglia, R. De Sole, M. Nardone. However, the experimental research activities in the first eigthies were concentrated in the performance of synchrotron radiation experiments, mainly x-ray absorption spectroscopy (XAS), at the ADONE (PULS, Frascati) facility, and in the establishment of a surface physics laboratory. Those activities were carried out by S. Stizza and I. Davoli, following an initial effort of A. Bianconi. In that period (1986), S. Stizza was the director of the new Institute of Physics. The generous activity of this group leaded finally to the establishment, in the academic year 1987/88, of the first Laurea degree course in Physics of the Marche region, within the Faculty of Scienze Matematiche, Fisiche e Naturali dell'Universita' di Camerino.

We also use analytics & advertising services. To opt-out click for more information.